L’INCUBATEUR JUNE: girls get down to business!

Over a period of four months, five young designers will have an extraordinary adventure at L’Incubateur June, a 100%-female business incubator.
In this ambitious project, designed exclusively for June by producer She is the Boss, some 15 young female entrepreneurs will try to gain a place at this next-generation incubator. And although 15 of them will try out for this experience with their innovative, surprising or crazy ideas and concepts, the five mentors will be evaluating them to choose only five, and will then coach the successful candidates as much as they can. 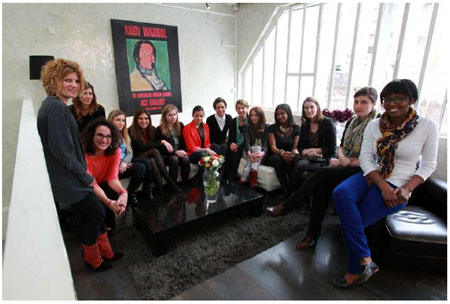 Céline Lazorthes (Leetchi), Hadj Khélil (Bionoor), Gabriella Cortese (Antik Batik), Michel de Rovira and Augustin Paluel-Marmont (of the duo Michel et Augustin) and Véronique Garnodier (Charlott’) will comprise the team of mentors that will assist the five candidates through this intense adventure. Even if good ideas are abundant and the drive to succeed is strong, making one’s business into a success cannot be improvised!

Each week, L’Incubateur June will present the participants with sizeable challenges to help them learn to balance their personal lives as modern young women with a successful career. With the help of business angels Céline Lippi, Francesco Maio and Denis Jacquet, the designers will do their best to impress their mentors and achieve the goal of starting their own business.

From the customization of tombstones to online tutoring for children and a teahouse on wheels, L’Incubateur June will have no shortage of unique, amazing projects!

“The incubator we have been developing since October 2012 with She is the Boss is a very ambitious project for the channels,” explains June’s programming director Camille Bingnon. “We had already had our reporter Carole Tolila preparing short portraits of young female entrepreneurs and are planning a longer version, still in line with the channel’s values, to be able to highlight this other aspect of ‘winning femininity’ and put the focus on young women who are creating value. The L’Incubateur June allows us to truly establish ourselves in this area.”

“We have received around 100 applications while preparing the shoot, yet finding female entrepreneurs under the age of 30 is no easy feat. The synergies are incredible for this project – everyone’s strengths come together to create a firmer team. The mentors, who are all participating on a pro bono basis, are driven by the desire to pass on their knowledge. They’ll help the candidates save a lot of time while gaining invaluable experience. With this series, we will be watching their progress, but the idea is also to give destiny a little boost. One of the goals of such a show, which I like to consider entertainment, is to make viewers realize that they, too, can create a business,” explains producer Stéphanie Brillant.

Women now represent nearly half of the working population, so L’Incubateur June is putting the spotlight on these risk-takers, who will be stopped by nothing. It all starts in January 2014 on June, the channel for all young women! It’s a captivating initiative that’s in line with the times, and will make viewers want to overhaul their lives and be more like these girls each and every day.

About June
June and MCM together form the Lagardère Active TV division's Young Adult range. June offers a variety of entertainment shows aimed at young women ages 15-34.
With a focus on glamour, entertainment and humour, it has grown more popular than ever with all young women. And this season, June has become the most female-oriented channel on the airwaves, with women accounting for 73% of the total viewership.

About She is the Boss
"Innertainment" and women's interests are the cornerstones of She is the Boss Productions. The company was created in 2007 by journalist Stéphanie Brillant.