For the past two years LER has been refining its documentary offer with programs that speak to an international audience. At the MIPDOC 2014, the selection will be boosted with programs in the following genres:

LER has recently expanded its catalogue to include factual entertainment with ‘The Day I Nearly Died’ from LP8 MEDIA.

A selection of the following new programs (produced by renowned French companies like Bonne Pioche and Program33) will be available at the video library of the MIPDOC in Cannes early April:

1/ 2014 marks the 100th anniversary of the Great War, with stirring stories both great and small…
‘Women at War’ recounts in color the daily life of unknown women, as well as famous figures such as Marie Curie, Edith Wharton, Mata Hari, Rosa Luxemburg…and reveals the decisive role they played outside the trenches during those four years of bloody conflict.
52’ of colorized archives retraces the destiny of these women, their feminist combat and patriotic drive now all but forgotten.
Produced by Program33 (‘There is No Such Thing as a Happy Kennedy’ / ‘Inside JFK’s Assassination’) for France 3

2/ ‘Morning Glory’ dips into the first light of morning to visit the waking moments of flora and fauna in some of the most spectacular biotopes across the planet: equatorial forests, river deltas, savannas, prairies, temperate forests… A quiet peek at the break of dawn in these stunning preserved places.
Produced by Bonne Pioche Télévision (‘March of the Penguins’) and Lowik Media for Arte.

3/ ‘The Pact’ takes us on a quest to find Hitler’s descendants, namely William-Patrick –– aka “my horrid nephew” to Hitler––and his 4 children, who together made a pact to let their bloodline die out forever by never bearing children.
Produced by Sunset Press for Planète +.

4/ ‘Berlusconi: Political Showman’ is a unique portrait of the Cavaliere up until his expulsion from the Senate last November. Can this media mogul, who dominated the Italian political scene for over 20 years, manage to bounce back despite his banishment? Does he have any political future in an Italy in crisis?
Produced by Opéra Films for France 5 and LCP. 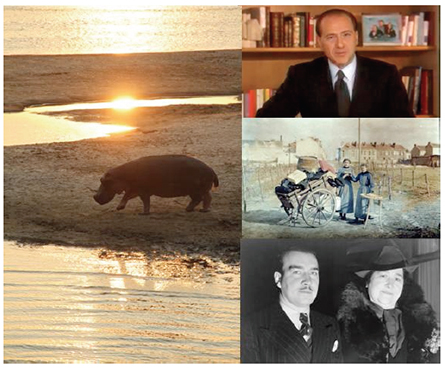