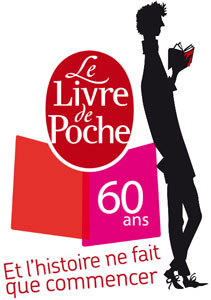 After only 60 years, Le Livre de Poche’s accomplishments are, in many respects, staggering: the sheer size and variety of its catalogue (comprising 5,200 titles in 2012), a roster of more than 2,000 authors and over a billion books manufactured and sold since 1953.

The publishing company’s strength is also embodied in its distribution figures, both within France (where it is sold in 20,000 retail outlets) and beyond, with a reach extending to all corners of the French-speaking world, from Canada to Switzerland and Belgium, among many other countries.

This unique publishing house also profoundly marked the second half of the 20th century by creating an irreversible “break” in French publishing through the democratization of great literary works. This virtual cultural revolution was made possible through the energy and determination of its founder, Henri Filipacchi, and provoked a fierce debate among intellectuals, some throwing their support strongly behind this movement to make literature more accessible to the masses and others seeing it as a “debasing” tactic.

The year 2013 promises to be a bountiful one for new releases, encounters with many great Le Livre de Poche authors and fresh discoveries. We are particularly pleased to celebrate this anniversary with booksellers; as a publisher, we regard their curiosity, raves and rants, and enthusiasm as invaluable advice that helps readers to make judicious choices in an increasingly abundant market.

This year will also mark a new development stage with the creation of the Le Livre de Poche e-book and a digital catalogue (including the classics, of course, plus a wide range of other literature, including thrillers and fantasy novels), all perfectly in keeping with our image as an eclectic, top-notch publisher.
Le Livre de Poche is, 60 years after its creation, finally and above all a human adventure undertaken by the passionate individuals comprising its editorial, artistic, marketing, production and sales teams, who constantly merge their skills every day in search of excellence.

May Le Livre de Poche continue to thrive throughout the 21st century! The story has just begun…

Published by the Librairie Générale Française

In conjunction with Le Livre de Poche's anniversary celebrations, you are invited to explore: