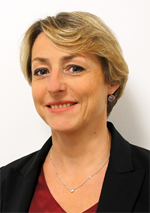 This appointment is effective as of the 28th of October 2013.

Laurence Baujat, who is 53 years old, holds a degree in Economics.She began her career in a subsidiary of the French Petroleum Institute (IFP), as an HR assistant, and was subsequently promoted to the role of HR Manager. She later undertook the position of Director of Human Resources for the AUBADE company. After a specific mission at the Jeanne Lanvin company, she joined the Lagardère Active group in 2010 as HR Director of the regional music radio stations division; her responsibilities were then broadened to also include Lagardère Métropoles.