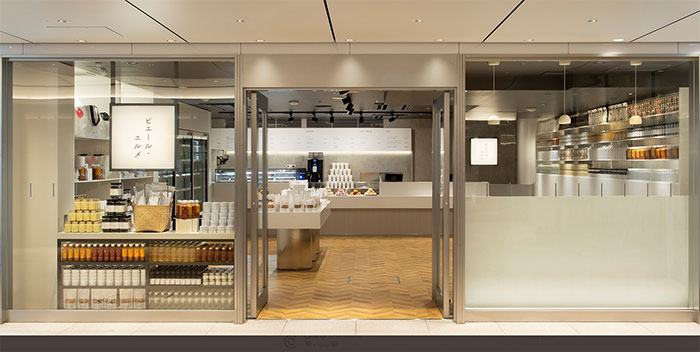 Made in Pierre Hermé is a contemporary F&B concept which showcases products from different regions of Japan and offers creative and uncommon recipes. The concept is based on the collaboration between world-renowned pâtissier Pierre Hermé and producers of top-quality food and produce from all around Japan. With a modern positioning suitable to the urban lifestyle, Made in Pierre Hermé’s core values are the support of local agriculture, the promotion of artisanal food production and a strong sense of responsibility to the environment and society through sustainable sourcing practices. This approach closely aligns with Lagardère Travel Retail’s commitment to introduce local and ethical products in the stores it operates, as part of its CSR strategy.

The store operated by Lagardère Travel Retail builds on the strength of the Pierre Hermé brand in Japan the success of the ‘Made in Pierre Hermé’ flagship boutique in Tokyo’s prestigious Marunouchi district. It offers a wide range of unique products including prepared and packaged food, specialty drinks and a variety of branded gift and retail items from different prefectures of Japan under the ‘Made in Pierre Hermé’ signature.

Tokyo Station is one of the busiest railway stations in Japan with half a million daily departures. The new store is in the newly opened North Entrance area of Tokyo Station, accessing all commuter, long-haul and Shinkansen (high-speed) rail lines.

Eudes Fabre, Chief Executive Officer for North Asia at Lagardère Travel Retail, said: “We are very pleased with the successful launch this outstanding brand in Tokyo Station and grateful to our partners at Pierre Hermé and the East Japan Railway Company for their support in turning this vision into reality. We believe this is the beginning of a strong partnership and we expect this first step in Japan will create new opportunities for Lagardère and its partners in this exciting market which has attractive growth prospects”.

Richard Ledu, Chief Executive Office of Pierre Hermé Paris Japon, commented: “Pierre Hermé has been present in Japan for over 20 years, and it is part of our mission to help French companies internationallyrecognized know-how to develop here. There are significant synergies between Pierre Hermé and Lagardère so this is a fantastic opportunity with further openings already planned.”

ABOUT LAGARDÈRE TRAVEL RETAIL
One of the two divisions of the Lagardère group, Lagardère Travel Retail is a global leader in the travel retail industry. Operating 4,800 stores across Travel Essentials, Duty Free & Fashion and Foodservice in airports, railway stations and other concessions in 39 countries and territories, Lagardère Travel Retail generated €5.5 bn in sales in 2019 (managed 100%). Lagardère Travel Retail has a unique holistic approach aimed at exceeding travelers' expectations throughout their journey, and optimizing landlords' assets and partners' brands.