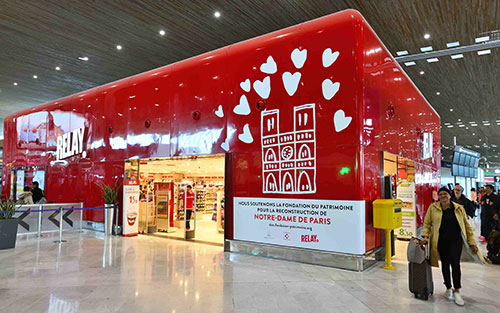 In addition to the division’s CSR commitment, the women and men who work at Lagardère Travel Retail France, like the rest of the world, have been very moved by the tragic event. Naturally, the teams all sprang into action the next day, on the ground and in their offices, implementing a concrete action plan to help rebuild the monument.

Soledad Bravi injected a note of poetry into the unhappy event with a magnificent drawing. Impressed by the actions set in place by Lagardère Travel Retail, the artist gave us permission to use her illustration to provide the visuals for the campaign. It appears on items including a t-shirt, postcards, POS displays, donation box covers and large-format posters.

Thanks to the involvement of expert and highly responsive partners, the “Notre-Dame de Paris” campaign was launched just a few days after the fire in over 100 Travel Essentials stores and almost 100 SDA Duty Free stores.

The RELAY stores have been equipped with digital collection boxes for customers to use to donate to the Fondation du Patrimoine. A t-shirt has been designed especially for the campaign, with all profits going to the foundation. And 100,000 postcards featuring the Fondation du Patrimoine’s address for donations were distributed free of charge during the first few days after the fire. SDA has also set up a donation system to raise funds for the Fondation Notre-Dame in 95 Duty Free shops located airside in the Paris airports.
Over 1,000 people have already taken part in efforts to rebuild Notre-Dame de Paris in Lagardère Travel Retail France stores by making donations or buying specially-designed t-shirts, magazines and books with the profits going to the foundations.

Well done and thank you to the Lagardère Travel Retail teams for making such as success of a campaign that encourages solidarity and the preservation of our heritage!