Home » Communiqués de presse » Lagardère Travel Retail France has teamed up with Phenix to distribute unsold food items to people in need, in the presence of the Minister of National Education and the Secretary of State for a Social, Solidarity-Based and Responsible Economy.

Lagardère Travel Retail France has teamed up with Phenix to distribute unsold food items to people in need, in the presence of the Minister of National Education and the Secretary of State for a Social, Solidarity-Based and Responsible Economy.

As poverty rises in France and the holidays are approaching, Lagardère Travel Retail has underscored its CSR commitments and strong human-focused values with this distribution of food to the disadvantages in partnership with Phenix, a startup specializing in anti-food waste measures, at its warehouse in Marly-la-Ville.

Due to the pandemic and the resulting travel restrictions, Lagardère Travel Retail France has seen a sharp decrease in traffic at its outlets in train stations and airports. Many products did not sell out, leading to surpluses at its warehouse in Marly-la-Ville. Since July, in partnership with Phenix, Lagardère Travel Retail France has donated over €240,000 in food, which has been redistributed to over 13 regional non-profits. 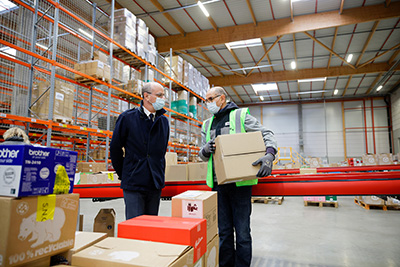 At a time when 10 million tons of edible food are thrown away every year in France, Lagardère Travel Retail France felt it would be scandalous to destroy these products and decided to instead donate these quality items to people in need.

Lagardère Travel Retail France then contacted Phenix, which has been working to fight food waste in France since 2014, to optimize the distribution of these surpluses to regional non-profits serving the disadvantaged. 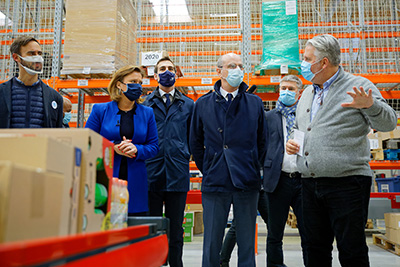 All praised Lagardère Travel Retail France’s initiative and Phenix’s essential role as intermediary and highlighted the new needs in terms of food aid, both structural and context-related (Covid-19), calling for more attention on this type of community-serving activity and efforts to make them permanent.

“Lagardère Travel Retail France definitely plans to roll out more of these initiatives,” commented Fabrice Berbessou. “I’m delighted that these actions have generated interest, especially as I know they are part of our responsibility as an employer. Collectively speaking, we’re very proud that the teams have rallied around these efforts to assist our fellow citizens.”

Phenix founder and CEO Jean Moreau added: “At a time when poverty is skyrocketing in France, particularly among young people, we and Lagardère Travel Retail France are demonstrating that large firms are ready and willing to step up to the challenge of fighting waste and benefiting people in need.”
Samuel Coppens reminded those on hand of the urgency of the current situation: “Since the beginning of the pandemic, an incredible number of people have come to see us for aid for the very first time. This was confirmed by Action Contre la Faim, which reported that fully half of them had never contacted any non-profits before the first lockdown. Not to mention the fact that 30% of the French population has seen their income drop considerably.”

Fortunately, at this point we have already moved on from the awareness-raising stage to taking real action in the field. This can be seen in the increasing number of initiatives underway in France, like the one being carried out by Lagardère Travel Retail France and Phenix, which not only help offset the tragic effects waste has on the environment but are also a considerable weapon in the fight against food insecurity.

Although both firms are pioneers, they may also become examples to emulate in a very short period of time. Furthermore – and the presence of the Minister of National Education is proof of this – there is now a true political commitment to making the Social and Solidary-Based Economy one of the priorities of future generations.

Olivia Grégoire, Secretary of State for a Social, Solidarity-Based and Responsible Economy, commented: “We have come to shine a spotlight on generosity and serving the community. Non-profits represent hope. They are always looking to serve others, but we’re here to remind them that the government looks to serve them too. Solidarity is a key value at times of crisis like these. Tax measures have been put in place to encourage everyone to contribute. Donations to food non-profits (known as “Coluche donations”) come with the right to a 75% tax reduction with a ceiling that will be maintained at €1,000 for both 2020 and 2021.”

Launched in 2014, Phenix is the leading startup in anti-food waste efforts in France, with over 120,000 meals saved each day thanks to its network of participating professionals, non-profits and private individuals. With the goal of creating a world without waste, Phenix’s 170 anti-waste coaches design and implement innovative solutions aimed at ensuring that unsold food and non-food items never become waste. Phenix has recently unveiled a mobile app allowing users to actively fight waste by buying unsold items at a discount.