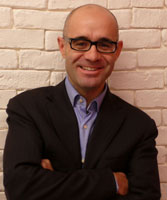 Jean-Christophe LESTRA, CEO of the French and International Music Radio Division announces the appointment of Jean ISNARD as Head of programming for French musical radios in replacement of Sam ZNIBER who has left the Group .

His area of responsibility will include devising as well as implementing relevant program strategies for French music radio stations, Virgin Radio and RFM as well as for their multimedia extensions (companion sites and web radios).

Jean ISNARD, who takes up his job today, will report directly to Jean-Christophe LESTRA.

Jean ISNARD, who was born in 1969, is a radio buff; he is a graduate of the European Broadcasting School and founded his first free radio station the back in 1981 in Hautes-Alpes. Several internships at radio stations across the USA further fuelled his passion for this medium. He began his career in 1989 on Skyrock, where he was radio station director and where he met Arthur Essebag. In 1994, he became program advisor at Europe 1, under Patrice Blanc Francard, then joined Fun Radio as acting managing director until 1998. Later, he was responsible for developing MTV European operations out of London, and established 10 European national opt-outs. Upon his return to France in 1999, together with Benoît Sillard, he created Tv-Radio.com, which is today a subsidiary of TDF, developing the first complete streaming service for radio stations.

In 2002, he set up with Thierry Dumont Full Feel Factory, an audiovisual production company with main emphasis on dubbing and voice-over as well as advisory services to media companies. In this capacity, he conducted several consulting missions for Pink TV and BFM TV.