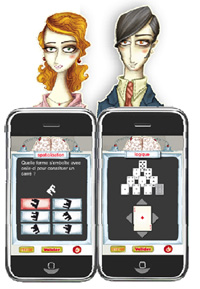 Inspired by Psychotechnical Tests for Executives by Bernard Myers (an entrance exam trainer and author of numerous “brain game” books), the Dunod Brain Aptitude Tests – Level 1 application (named for the books published by Dunod) includes a series of tests based on letters, spatial aptitude, numbers and logic.

This app includes over 70 tests given during job interviews and certain academic entrance exams. This fun, educational app gives the user a thorough grounding in psychotechnical tests, which can often be quite surprising and even disconcerting.

Introduced by a male or female character selected when the app is launched, each batch of tests lasts for a maximum of 20 minutes. The user is questioned (on the proper spelling of a word or a logical series of numbers, for example) and scores points in line with his or her results. Each time the app is launched, the questions asked are selected at random from a pool of available questions. The user can interrupt the test at any time and pick it up later, thanks to the automatic Save function. When the allotted time has elapsed, the overall score is displayed and a mark is assigned for each category (letters, spatial aptitude, numbers and logic).

The app includes a link to www.dunod.com so that the user can purchase the original books, and the user’s score can be shared by e-mail or directly via his or her Facebook page.

The Dunod Brain Aptitude Tests – Level 1 application is available through the App Store (via the Education section) as of 7 January 2011.

Dunod, which has been publishing scholarly works for over 200 years, has a backlist of some 3,500 titles and publishes 450 new releases annually in the fields of science and technology, computing and multimedia, business and management, and the social and human sciences, intended for students, professionals and members of the general public with an interest in such fields. Always on the lookout for new knowledge areas and innovative technologies, Dunod recently launched its first iPhone application.

Bernard Myers is an academic trainer and the editor-in-chief of Dédale Publications, which publishes the bimonthly review Spécial Logique. He is also the author of numerous brain game books. In addition to being the co-author of the Grand Livre des Tests Psychotechniques, published by Dunod, he is the author of several books of psychotechnical tests for executives from the same publisher.

Founded in 2000, Anuman Interactive SA is a leading publisher of software for the general public, specializing in the fields of architecture, the French road traffic code and creative entertainment. A subsidiary of the Media-Participations Group, Anuman Interactive is positioned as an innovative, dynamic publisher in the video game market with a number of outstanding titles (Trainz, Pacific Storm and Prison Tycoon) and in the edutainment market with the Clifford, Casper and Muppet Babies licenses.

Anuman Interactive is proud to work with such prestigious partners as Renault, M6, Hatier, Atari, Système D and ParuVendu, which provide support for its increasingly sophisticated software designs.
As of 2007, Anuman Interactive also publishes games for Nintendo DS, Wii and Sony PSP, as well as iPhone and iPod Touch applications. At the end of 2009, Anuman Interactive acquired the Microids collection brand name and catalogue, world renowned for its high-quality video games.