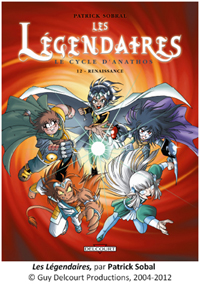 GENAO Productions (formerly TIMOON ANIMATION) is proud to announce it has acquired the audiovisual adaptation rights to the « LÉGENDAIRES », the celebrated comic strip written by Patrick SOBRAL and published by Delcourt.

With over 1.7 million albums sold « Les Légendaires » is one of the best selling comicstrips for youth in France today.

In 2011, the series “Les Légendaires” was ranked second among the best-selling comic books sold in France, a close second to «Les Aventures de Tintin» (source GFK).

The series, which is packed with allusions to manga comic trips, video games and the world of literature, is targeted at the 6 to 12 year olds and builds on the original comic strip, subtly blending adventure, values and humour.

Or at least they used to be…

They have lost their battle against evil and all the adults have become children again. Now, «Les Légendaires » must repair their blunder! Not an easy thing when you are only 10 years old!

Guy Delcourt : « Les Légendaires is a dream come true for every publisher. Self-taught author Patrick Sobral draws on his childhood favourites – and his craze for the animated Japanese series of the 80s – to create a series of his own, sparkling with imagination, wit, energy and contagious joy. With each album, young fans are becoming more numerous; over a million now, turning Légendaires into THE comic strip of our time. Due to the way this idea came about and due to its success, Patrick Sobral’s work was destined to become an animated series: This is not a rehash of the same story line; but a new milestone in the triumphant march of Légendaires. The new generation of readers and viewers is going to thank its lucky stars for a long time to come! »

Sandrine Nguyen and Boris Hertzog : « We literally fell in love with this witty and action-packed comic book which is read avidly by all children. Our intent was to acquire the audiovisual adaptation rights as part of a policy that combines licensing and original properties. The first developments in collaboration with our teams and those of Delcourt Publishing are exciting.
We are looking forward to producing a terrific series that will be as successful as the comic book ».

About Genao Productions:
Headed up by Boris Hertzog and Sandrine Nguyen since 2008, the company has made a name for itself as one of the leading producers of French animation by producing 7 series in 3 years: Linus & Boom (52×13) Gnark (52×7), Monk (52×3), Fish & Chips (52×13), Scary Larry (52×13), Mini Loup (78×7) and Xiaolin Chronicles (26×26).
In order to further strengthen its roots in animation, the company recently acquired the audiovisual adaptation rights to the celebrated comic strip published by the Delcourt Publishing Company « Les Légendaires » and pursues many ongoing ventures as well as currently developing unscripted programs and fiction for young people in order to reach out to the whole family.