Fear No Evil, an Alex Cross thriller by James Patterson published by Little, Brown and Company 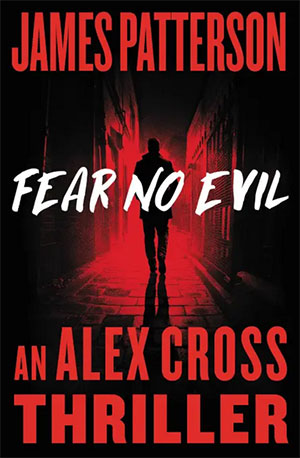 Alex Cross enters the final battle with the all-knowing genius who has stalked him and his family for years.

Dr. Alex Cross and Detective John Sampson venture into the rugged Montana wilderness-where they will be the prey.

They’re not on the job, but on a personal mission.

Until they’re attacked by two rival teams of assassins, controlled by the same mastermind who has stalked Alex and his family for years.

Darkness falls. The river churns into rapids. Shots ring out through the forest.

No backup. No way out. Fear no evil.

Patterson’s writing career is characterized by a single mission: to prove to everyone, from children to adults, that there is no such thing as a person who “doesn’t like to read,” only people who haven’t found the right book.

He’s given over a million books to schoolkids and over forty million dollars to support education, and endowed over five thousand college scholarships for teachers.

He writes full-time and lives in Florida with his family.