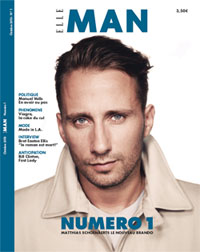 After the recent launch of ELLE in Australia, bringing the number of global editions up to 44, and building on the success of the 11 already existing editions of ELLE MEN, particularly in Asia, the ELLE brand is now launching a new spinoff in France: ELLE MAN, a magazine for men featuring the latest trends in style, culture and society.

ELLE MAN REFLECTS THE IMAGE OF TODAY’S HASSLE-FREE MAN who has a style of his own, likes fashion without getting carried away, has a sense of taste, and likes to keep informed and enjoy himself. The tone is original, off-beat and quintessentially male.

ELLE MAN IS BROKEN DOWN INTO FIVE MAIN CATEGORIES:

ELLE MAN WILL BE HOSTED ON THE ELLE.FR WEBSITE in a section devoted entirely to men. This space, enriched with new content daily, will disseminate the ELLE MAN spirit on the Internet.

According to Valerie Toranian, editorial director: “Men are changing; they consume differently and are increasingly affirming their tastes and identity. Designing a new magazine to accompany these changes is an exciting challenge. ELLE MAN is a stylish magazine for all styles of men, a magazine without hang-ups, in tune with the times, that transcends divisions, stereotypes and typologies.”

According to Edouard Dutour, editor-in-chief: “The best revenge would be to see a woman leaning over the shoulder of her companion reading ELLE MAN. ELLE has a magical dimension that ELLE MAN would do well to appropriate: it aims to be a unique but universal magazine, like nothing else, but intended for everyone.”

WITH THIS LAUNCH, THE ELLE BRAND SUCCESSFULLY CONTINUES ITS DEPLOYMENT:
Launch of ELLE Australia, the 44th international edition since 23 September 2013
Launch of the new www.elle.fr website, with a section devoted to ELLE MAN

The ELLE MAN network throughout the world:

THE ELLE BRAND:
The magazine: France’s leading high-end women’s magazine with a weekly readership of over two million readers* and paid circulation of 382,860 copies**
* One 2012-2013 ** OJD 2012-2013
International editions reaching an audience of over 33 million readers: 44 editions of ELLE in 43 countries, 25 editions of ELLE Décoration, 4 editions of ELLE à Table (3 editions of ELLE Girl and 2 editions of ELLE Man.*
* Published under a licensing agreement with Hearst in 17 countries, and Burda, Aller, Sanoma, Ringier and 14 other partners in 25 other countries.
The leading high-end women’s magazine website with Web Responsive Design and more than 2 million unique visitors (Médiamétrie Nielsen) and 30 million page views monthly (AT Internet).
Daily ELLE: a daily fashion webzine based on a unique, innovative, off-beat concept, which has become “a must read” in the fashion world in just a few months.
ELLE applications for mobile phones and tablets: ELLE, ELLE Astro and ELLE à Table apps
A lively, active social-network community: