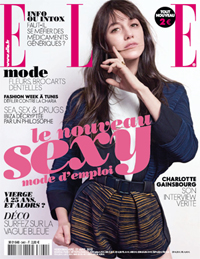 According to Valérie Toranian, Elle’s managing editor and brand manager for the Elle brand, “Elle is a creative, demanding brand that has always known how to stay fresh. Today, our goal is not only to have a presence on all media (magazine, web, mobile devices, tablets etc.), but also to launch original content with a very strong identity tied to our values. Now more than ever, we must be true journalists, defend our choices and enhance the value of our brand’s image and point of view. Our strength lies in our subjectivity.”

The leading high-end women’s magazine, Elle has over 2 million readers* and paid circulation of 383,845 copies** every week in France, and 2.3 million unique visitors log on to Elle.fr every month (Nielsen). The magazine has just received the SPM’s 10 Years of Success award in recognition of the Elle brand’s power and editorial momentum.