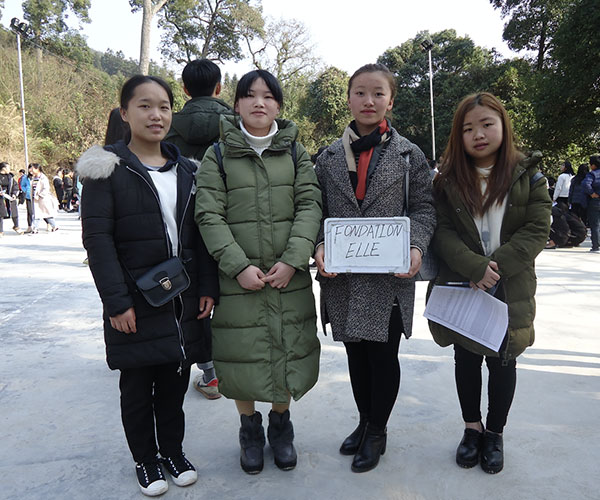 In the autonomous region of Guangxi, in southern China, it used to be rare for girls to continue their education beyond secondary school. Girls were expected to marry and take care of their in-laws; education for women wasn’t considered a priority.

But things have changed in this vast region of 50 million inhabitants on the Vietnamese border. And Couleurs de Chine has helped to make that change possible. Over the past two decades, this French organization has provided financial support enabling 12,000 young people – 87% of whom are women – to attend school, from the primary level to university.

In 2015 the ELLE Foundation awarded 10 scholarships to young women who were looking to pursue their studies beyond secondary school. Now university graduates, those women have embarked on careers and are telling us how that helping hand changed their lives.

In a letter she sent to the staff of the ELLE Foundation, Wei Meiping writes that, in addition to the financial support, the scholarship she received gave her the confidence she needed to attend an urban university far from home, study tirelessly for her exams and muster the courage to go to a hiring interview.

Today, Wei Meiping is a nurse in the hospital in Hongshui. She is responsible for vaccinating young children and raising health awareness in schools. Though she complains about all the government paperwork, she loves her job. She uses a Chinese expression to define her role: “a lifesaving angel who cares for others.”

Wei Meiping has chosen to live near her family in the countryside. She tells us how proud she is to be earning money and helping to cover the family expenses. Thanks to her, her younger brother has been able to stay in school without the need for her parents to apply for another scholarship from Couleurs de Chine. It’s a wonderful demonstration of the power of education.