“In my country, women’s bodies are the battlefield for war” 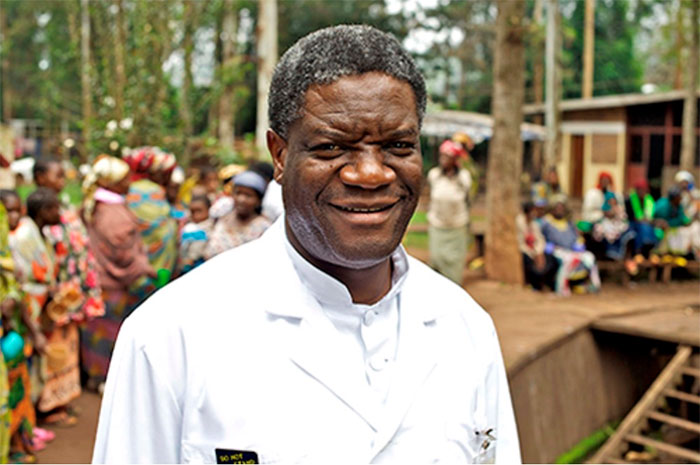 A news item arrived on my telephone.
We were in a meeting with various large companies, L’Oréal, Carrefour, Kering, Korian and BNP Paribas, to work on a programme to raise awareness of violence against women.

I interrupted my colleagues’ thoughts, lifted my arms in victory and announced the amazing news!

Timely recognition for the courage, determination and commitment of this extraordinary man who, for years, has been speaking up for the women of his country, the Democratic Republic of the Congo, as well as all women who have been victims of rape used as a weapon of war, those who have survived and those who haven’t.
The next day, Dr Mukwege spoke at a press conference held at his hospital in Bukavu. He learned the news as he was operating and his statement made his goal clear.

“This prize will be meaningless unless it plays a role in changing the situation of women in zones of armed conflict. For nearly 20 years, I have witnessed war crimes committed against women, not only in the Democratic Republic of the Congo but also in several other countries around the world

I would like to say to you that, thanks to this prize, the world is listening to you and refuses to remain indifferent, refuses to stand by in the face of your suffering.

It is you, the women, who carry humanity within you.”

I would like to say how proud we are at the ELLE Foundation to have been contributing to Dr Denis Mukwege’s work for the last four years. We provide support for the psychosocial rehabilitation programme helping women being treated at the Panzi Foundation hospital.

Once they have been operated on and repaired, they are taken in by the Dorcas House centre where there are teams who give them support so they can restore their women’s dignity, learn a profession and get their lives back.

The centre also welcomes girls, victims or orphans, as well as a few boys, born as a result of their mother’s rape and abandoned at the hospital, representing as they do the scars left by a nightmare the women want to forget.

Over the last 14 years, the ELLE Foundation has supported dozens of projects in over 30 countries. Our support for Dr Mukwege’s work is certainly the action I am most proud of, and it is the greatest honour to have been able to help. I have never met him, but his dedication is an inspiration, the sort of inspiration that stops us giving up in moments of doubt.

And for that, Dr Mukwege, I thank you from the bottom of my heart.