ChinePlus celebrates its fifth anniversary with a new format 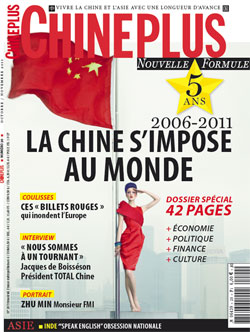 The groundbreaking economic magazine devoted to China, ChinePlus, launched by Lagardère Active in 2006, is celebrating its fifth anniversary.

In just five years (2006-2011), China has emerged as a global power, and ChinePlus followed each stage of its ascent.

Each quarter, ChinePlus reports and interprets the economic, social and cultural transformations taking place in China, which in a few years has become the world’s growth engine and banker.

To mark this anniversary and monitor the situation on the ground as closely as possible, the magazine is now taking a new editorial direction with the introduction of two original columns:

This special issue, available in newsstands on 6 October, devotes 42 pages exclusively to the economic, societal, political, financial and cultural transformations of this great power whose role in our lives continues to grow on a daily basis.
“It is through China that we can read the future of the world” – Madeleine Barbier, Editor in Chief.