At the Annecy International Animated Film Festival and MIFA film market: The first Masterclass on screenwriting for family-oriented animated series 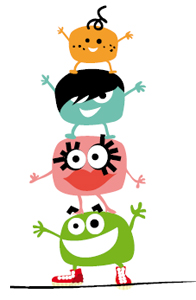 French animation is recognized the world over for its high quality, yet few animated series have had true success with families like certain live-action series, which have become true social phenomena and even animated feature films that hit the top of the charts and draw incredible numbers of families to cinemas.

But what are the keys to making a successful feature film, sequel or animated series that the whole family will enjoy? Does writing aimed at several levels succeed in bringing together different people with eclectic tastes?

What about collaborative team writing? Is humour the ideal No. 1 common denominator? There is no magic formula, but success may be found in a mix of all these ingredients – plus others!

Starting with this observation, and with the aim of responding to a true concern of sector professionals, The Media Faculty, Gulli and CITIA, with support from SPFA, teamed up to create a masterclass: “From feature film to animated series: writing for the whole family.”

On hand will be such big names in international animation as Chris Miller, screenwriter and director of Shrek 3, and Joe Aguilar and Tom Wheeler, producers and screenwriters of Puss in Boots; such French professionals as Alexis Lavillat, producer at Normaal Animation, and Sébastien Thibaudeau, literary director at Zagtoon; as well as Christian Baumard, general director, accompanied by Aude Thévenin, artistic producer, and Khaled Amara, screenplay director for the sitcom Scènes de Ménage at Kabo. A panel of experts like this guarantees interesting subject matter for the course.

Experience-sharing and advice from experts generate responses to many questions and provide the keys necessary to achieve innovative writing for family-oriented animation.

This masterclass will take place over two days during the Annecy International Animated Film Festival and MIFA film market (Monday 4 and Tuesday 5 June 2012) and will be directed by Christophe Erbes, currently a consultant for children’s television channels and production companies, screenwriter, children’s book author and literary director. From 1988 to 2006, he also worked as a programme director (Fox Kids Europe, Super RTL and more) and managing director (Nickelodeon Germany, Jetix Germany).

For more information or to register: