Home » Communiqués de presse » At last, gamers have their own ceremony!

At last, gamers have their own ceremony! 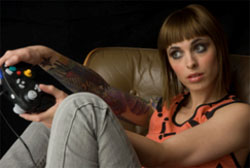 The Next Gen Special: video games of the year
Presented by Noémie Alazard

EUROPE 2 TV is set to launch the first televised awards ceremony in France to recognize the best video games of the year – the NEXT GEN SPECIAL: VIDEO GAMES OF THE YEAR.

The broadcast
On Saturday 8 December at 11 pm on EUROPE 2 TV, Noémie Alazard, presenter of NEXT GEN, the weekly magazine that brings viewers the latest news on video games, will reveal the winners chosen by visitors to the channel’s website during an exceptional event: the NEXT GEN SPECIAL: VIDEO GAMES OF THE YEAR.

From 22 October to 22 November, the public will be able to vote for their favourite games of 2007 on the EUROPE 2 TV website :