Asterix and the Picts: 35th Asterix volume set for worldwide release on 24 October 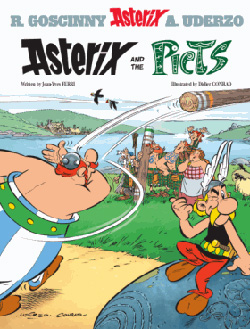 Asterix features one of the world’s most popular comic-book heroes. Created by illustrator Albert Uderzo and writer René Goscinny, Asterix is the world’s most-translated and best-selling comic-book series. Translated into 111 languages and dialects, it has sold 352 million copies since it first came out.

On 24 October, Éditions Albert René is releasing the series’ 35th album, Asterix and the Picts, in 23 major languages with a print run of 5 million, including 2 million for the French-language version.

Who are the Picts? They are a tribe of fearsome warriors in ancient Scotland with many different clans. Their name, bestowed by the Romans, literally means “painted men.”

This is the first album produced by the new creative team of writer Jean-Yves Ferri and illustrator Didier Conrad.

Also available is a 128-page large-format (26 x 36.5 cm) deluxe edition with a square, cloth-covered spine in Asterix red and a headband in Obelix blue. This deluxe edition includes the colour album, reproductions of the original rough drawings and a 33-page booklet that explores the work leading to the creation of this new album, featuring various never-before-seen drawings and production documents from Albert Uderzo, Ferri and Conrad.

Worldwide release of the 35th Asterix album, Asterix and the Picts, in 23 major languages. Print run: 5 million copies, including 2 million for the French-language version.

14 October 2005
Release of the 33rd album, Asterix and the Falling Sky: 8 million copies sold in Europe.

Spring 1989
The Asterix theme park opens in the French town of Plailly in the Picardy region; it drew close to 1.8 million visitors in 2012 and is the second-ranked theme park in France in terms of annual visitors.