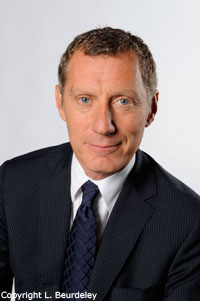 He is succeeding Emmanuelle Guilbart and will take up his new job on 13 September 2010.

In that capacity, he will be in charge of developing the publishing business of Lagardère Active TV Channels, both in France and outside, in particular: of strengthening their audiences and their leadership position, of rolling out brands worldwide and on various digital media (web, catch-up TV, iPad, etc.) as well as diversifying sources of revenue (in particular, through licensing policies).

Didier Quillot said: « I am thrilled by the arrival of Antoine Villeneuve within Lagardère Active. He has extensive knowledge of the issues faced by TV both in France and abroad. His experience in managing TV youth channels such as Jetix and an international division of Walt Disney as well as his expertise in the field of contents and new sources of revenue (digital and licensing activities) will constitute invaluable assets for Lagardère Active TV Channel Division».

48 year-old Antoine Villeneuve is a graduate of IEP Paris and holds a specialized professional D.E.S.S degree in market research and strategy as well as a master’s degree in history. After spending some 15 years at Canal +, as, among other things, managing director of Canal+ Nordic, the Scandinavian subsidiary, Antoine then went on to become managing director of Jetix France (ex-Fox Kids) then managing director and Senior VP of Walt Disney Television India.

Picture and detailed CV upon request