Home » Communiqués de presse » After the success of The Whisperer which sold over 500,000 copies in France, the French translation of Donato Carrisi’s third novel was released on 16 October by the Calmann-Lévy publishing house.

After the success of The Whisperer which sold over 500,000 copies in France, the French translation of Donato Carrisi’s third novel was released on 16 October by the Calmann-Lévy publishing house. 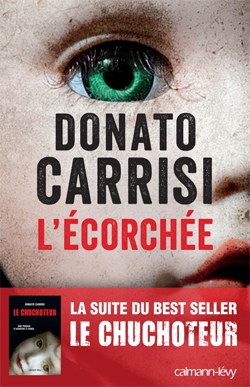 L’Écorchée, a sequel to The Whisperer
Have you ever wanted to disappear?

We have all wanted to disappear at one time or another, to flee as far as possible, and leave everything behind. But for certain people, this feeling is not just transitory. It obsesses them, devours them, and swallows them up. These individuals simply evaporate, body and soul. No one knows why. No one knows where. And soon, they are entirely forgotten. Or nearly. Whenever Mila Vasquez enters “Limbo”, the missing persons office whose walls are covered with their likenesses, their gaze is fixed on her. She is always aware of them in her role as an investigator whose flesh bears the marks of their darkness, like so many blood-red flowers. Perhaps that is the reason she excels in her field. Perhaps that is why, seven years after confronting the Whisperer, she refuses to feel any emotion. And if these missing persons suddenly reappeared with intent to kill? Like the surf, the darkness spits out the first signs of their past existence. And then the beings themselves.

At first view, they seem to be identical, but in the meantime, they have been transformed by evil. Where were they during all this time? Why did they return? To stop this army of darkness in its tracks, Mila must construct a solid, rational and convincing hypothesis. A hypothesis of evil. But to put it to the test, she will have to plumb the abyss herself.

Born in Italy in 1973, Donato Carrisi is the author of some of the world’s most successful thrillers. The Whisperer, his first novel, sold over half a million copies in France, was translated in 20 different countries, received four literary prizes in Italy, and was awarded the SNCF Thriller Prize and the Livre de Poche readers award in the thriller category.