A special evening commemorating the passing of Mstislav Rostropovitch on 27 April 2007 will be broadcast on Mezzo on Tuesday 5 June, starting at 8:45 pm. 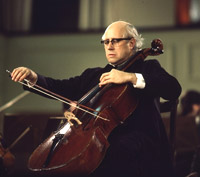 Mstislav Rostropovitch was undoubtedly one of the world’s greatest cellists. After leaving the USSR in the mid-1970s, he worked both as a cellist and conductor in the United States. As director of the Aldeburgh Festival, he was captured on film conducting a rehearsal with the Pears Britten Orchestra, featuring pieces by Krzysztof Penderecki and Benjamin Britten. He can also be seen discussing his plans for his music and for the future.

Haydn’s Cello Concerto No.1 in C Major is renowned for its melodic and rhythmic variety. Despite the fact that it was discovered in only 1961 at the National Museum in Prague, it soon entered the repertoire thanks to its exceptional qualities and the scarcity of cello concertos from the classical period.

Haydn’s Cello Concerto No. 2 was only definitively attributed to the composer in 1953 after the discovery of a handwritten score. Pushing the boundaries of music much further than Concerto No. 1, this work explores the technical possibilities of the cello, in particular its bichord and trichord effects.