Two events in one. For its fourth anniversary, the Jean-Luc Lagardère Trophy will be presenting a rich selection of legends from world tennis, led by John McEnroe, back in the tournament after having taken part in the first two events. The Trophy will also benefit from the sumptuous surroundings of Lagardère Paris Racing, one of the French capital’s most prestigious multi-sport clubs. A comeback and a unique encounter – two great reasons, among so many others, not to miss this meeting, which will take place between 20 and 23 September.

The presence of John McEnroe serves to guarantee a terrific show, one full of emotion and smiles. A magical tightrope walker and inveterate artist, over the years the American has never lost his thirst for success. 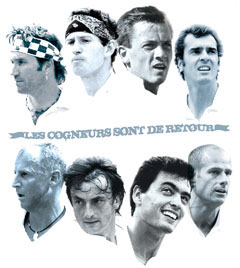 Great touch, the ability to squirt a ball through, tremendous coverage of the court, and an unwavering physique… all of these qualities can be attributed to Sergi Bruguera, winner of the first event in 2004, Cédric Pioline, Trophy finalist in 2005, and Thomas Muster, who for a long time remained unbeaten on the surface. Henri Leconte, whose tricks are appreciated just as much as his polished backhands, and of course Guy Forget, tournament director from its inception, will complete a list brimming with Grand Slam, Davis Cup and Masters title winners.

And if the cast list is exceptional, so is the stage. This year, the Trophy will not be taking place at Paris Jean Bouin, but at Lagardère Paris Racing, on the Croix-Catelan site in the Bois de Boulogne and in the presence of the players of TeamLagardère. The club is therefore set to revive its glorious past, given that this lush, legendary Parisian site hosted the athletics events of the 1900 Olympic Games. Everything is coming together to ensure that the occasion is majestic and prestigious. The question of who will succeed Marcelo Rios is wide open. All in all, the tournament promises to be a real treat.

To find out more and to reserve your seats now, visit :
http://www.trophee-jeanluclagardere.com