And the world is still your oyster! 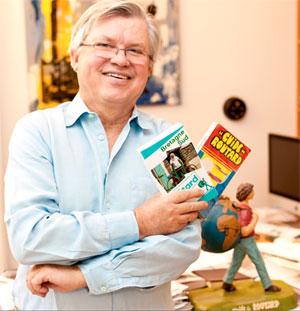 With over 40 million guidebooks sold in its 40-year history, it’s fair to say that Le Guide du Routard’s performance has been a phenomenal, unprecedented achievement! Its offbeat style and infallible frankness and honesty have made this travel-guide collection one of France’s great success stories. A copy is sold every four seconds.

Originally aimed at a readership of young people with little money, it has become the traveller’s bible. A trend here, a point there: that’s all it takes. Like its creator, Philippe Gloaguen, millions of Le Guide du Routard fans look out for the best places to go, follow the top tips and wise advice and track down some great ideas. “I didn’t invent anything,” the founder is keen to point out. “I just had the right idea at the right time. It’s not me who’s the star – it’s Le Guide du Routard!”

Philippe Gloaguen takes us behind the scenes of his business and shares some of its production secrets to coincide with the release of Le Plan Parfait, a film whose hero, played by Dany Boon, is a writer for the guide.

Routard.com: a resounding success
The website routard.com has continued to grow since its 2001 launch. Its strengths include maps that are never out-of-date, practical tips and up-to-the-minute information. The site offers a new kind of trip planning for its increasing visitor numbers. Some of the most loyal routardnatics have even become experts in their own right! In the forums, correspondent Séba-Vadrouille has shared over 3,000 pieces of valuable advice on Asia, while US fan Mayannick has already posted over 6,000 messages and correspondent Fecampois has published over 60 reviews in the Hotels section.

What goes without saying goes even better when you say it!
“Travelling is about looking at how you think and make judgements; it’s about learning to see things differently, not just elsewhere but at home, too. So don’t judge things too quickly – that’s how racism starts. Accept difference. When you’re in a foreign country, you’re the foreigner!”
Philippe Gloaguen

IN BRIEF
Practical tips, getting away from it all, curiosity, new discoveries, meeting, understanding, culture, good food, charm, falling in love with something, conviviality…

Writing Le Guide du Routard: it’s all about the legwork…