Home » Communiqués de presse » 1949-2009: on March 26, Paris Match will celebrate its 60th anniversary with a special issue and a preview launch of E-Match

1949-2009: on March 26, Paris Match will celebrate its 60th anniversary with a special issue and a preview launch of E-Match

Since 1949, Paris Match has been an intimate part of the French landscape, providing its vast readership with breaking news and feature stories both great and small.

Throughout 60 years of unforgettable covers, exclusive photos, scoops and investigative reporting, Paris Match has developed a tight relationship with its readers. For its anniversary issue, the magazine is running an exceptional edition, providing a bridge between the emotions of the past and the challenges of the future.

And to confront the next 60 years, Paris Match is resolutely preparing the future with e-Match. 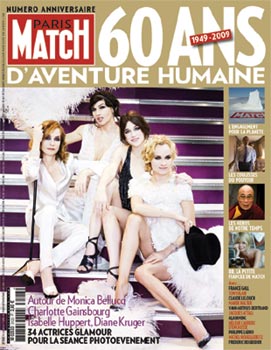 On March 26, Paris Match will simultaneously provide its readers with a collector’s edition of the magazine, and a sneak preview of the magazine’s future electronic version, designed to complement the hard copy. Developed by the CrossValue agency, part of the Lagardère subsidiary Nextedia Group, e-Match is a new digital magazine concept. e-Match allows readers to easily flip through the pages directly on the screen; and provides the exclusive multimedia usage of the photographic, editorial, and advertising content. It also provides links to partner sites and to ParisMatch.com. This feature will enable advertisers to develop and tailor their message to the magazine content as well as subtly incorporating it into the interactive layout.

Due to its advanced technology, e-Match is an evolving concept. It is likely that e-match will merge onto the touch-sensitive screens of the iPhone, or function with Windows Seven by Microsoft, as well as on new multimedia vehicles such as interactive terminals.

This first edition of e-Match, a digital version of the 60-year anniversary issue of Paris Match, will be freely accessible on the Web from 26 March to 2 April and will be followed by pilot issues over the summer. Each e-Match can be accessed free of charge for a week at the following address: www.e-match.fr, at the same time as the hard copy magazine is sold in newsstands.
The official launch of e-Match will take place in the second half of the year, and readers will be asked either to pay for each issue of the e-magazine or take out a subscription.

Paris Match is France’s premier news magazine and the fifth largest worldwide; it is available in 120 countries and sells over 633,000 copies each week (OJD, DFP 2008), reaching an audience of 4.7 million readers (AEPM 2008). Last October, the magazine was rejuvenated and revamped with the collaboration of American designer Mario Garcia.

According to Olivier Royant, Editor in Chief of Paris Match: « As it celebrates its 60th anniversary, Paris Match is resolutely looking to the future while remaining close to its fundamentals: capturing arresting pictures and placing human stories at the heart of its editorial line ».

Throughout the month of March, several events will enable reader to enter the spirit of the magazine and to live or relive the great moments of news reporting:

- « Rencontres », a large-format photo exhibition, in partnership with the French Railways SNCF in front of Gare de Lyon train station in Paris and across France and a video clip produced by Full Fell Factory will be screened until 29 March in all regional train stations.

-« Paris Match. 60 photographes pour 60 ans d’actualité ».
A book published by the de la Martinière Publishing Company on the daily lives of photographers who captured and still capture pictures that made history. Sold in bookstores on 20 March.

-« Paris Match. La saga des unes ». The first documentary about the magazine that looks behind the scenes and provides an overview of 60 years of photos, sterling reportage and international events. Highlights of the documentary will be broadcast on France 5, on 23 March at 8:35 pm and on 26 March at 4:30 pm on France 2 and France 3 as well as on RTBF, TSR, TV 5 Monde, and RadioTélévision Canada.

-« Europe 1 fête les 60 ans de Paris Match ». Michel Drucker will on 26 March anchor a special programme called « Europe 1 Découvertes » from 9:30 to 11 am. Other surprises have also been planned from 23 March at different news slots.